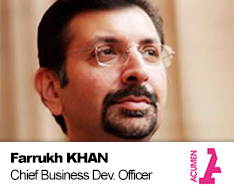 The environment, my colleagues, and the discourse at Acumen has reinvigorated me internally and intellectually, motivating me to do the hard work everyday.”

Farrukh H. Khan is the Country Director & CEO of Acumen Pakistan and one of the leading independent business and financial advisors in the country.

With over 25 years of senior management and board level experience, Farrukh is the founding partner and former CEO of BMA Capital Management Limited. Under his stewardship, BMA established itself as the leading investment banking group in Pakistan and received several international awards, including the 2010 Euromoney award for the best investment bank in Pakistan.He has worked on many landmark transactions, including advising the Privatization Commission on the US$813 million GDR offering of Oil and Gas Development Company Limited (OGDCL), which was listed on the London Stock Exchange, and successfully advising Etisalat on their $2.6 billion acquisition of PTCL, the largest M&A and foreign direct investment in the history of Pakistan. He has a deep understanding of business and investment environment in Pakistan and has worked with the senior most levels in companies and governments. He also has an excellent network and knowledge of business in the Middle East and South Asia

Before founding BMA he worked with American Express Bank in Pakistan and Deloitte in London. He has previously served as the President of the Overseas Investors Chamber of Commerce & Industry (OICCI), Pakistan Chapter Chairman of the Young Presidents’ Organization and on various private and public sector boards. Farrukh qualified as a Chartered Accountant from the UK and read BA (Hons.) in Economics and Finance from the University of Manchester.